Hello everyone and welcome to the twenty-ninth edition of The French Connection. Here we will be covering the third of four straight games featuring the Advance Variation of the French Defense and discussing a number of different lines. Here, we will see Black make a very bad and anti-positional move in the opening. Combine that with an early blunder, and White has a clearly won position. However, what we will see is White failing to execute the win many times, but each time, Black fails to find the tactical shot that completely negates White's advantage, or even in some cases, claim an advantage for himself. From White's perspective, we'll be looking at the concept of prioritizing. When you have a won position early in the game, with many pieces, the challenge is getting priorities straight. Do you shore up your weaknesses? Or do you, without hesitation, go after the King? Or do you simply try to trade everything down to a winning endgame? This can often be a tough question to answer. On the flip side, after a number of errors by White, Black fails to find the move, and hands the advantage back to White. Then, in the endgame, where White has two minutes to Black's thirty-five minutes, White gives Black one last opportunity, which was again missed, and then the door is slam shut on Black and White proceeds to execute a long but simple endgame sequence to force the King to resign. 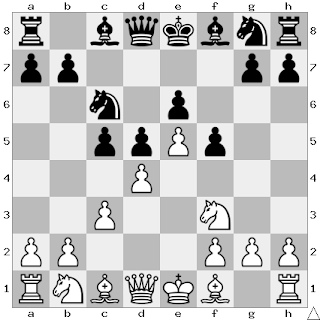 Unusual moves are played in chess all the time. This is where novelties come from. That said, if you understand the main ideas of the French Defense, you would soon realize the problems with this move. Yes, occasionally ...f7-f5 is played later on in the game as a source of defense, but here is it simply too early and too committal. In most cases, Black has two pawn levers in the French Defense. The first is ...c5, which was played on move 3, and the other is ...f6, hitting the pain chain from the front. By playing an early ...f5, Black loses that later pawn lever.

Now another thing to note is that taking en passant cannot be recommended here. It relieves the cramping effect for Black, and when he takes back on f6, White has to constantly look out for ...e5. By leaving it there, Black still has to deal with a major cramping effect.

Black relieves all tension from the White d4-pawn. Normally, if this move is played, it would be played immediately following White's move a3, looking to prevent b4 by White as Black would take en passant and win a pawn. Here, the Queen is passively placed on c7 instead of b6, and all pressure on the White center is gone. This gives White the green light to start attacking the Kingside.

Just flat out overlooking White's tactical threat. Better was to take the Knight with 11...Bxg5. Now White wins a pawn. 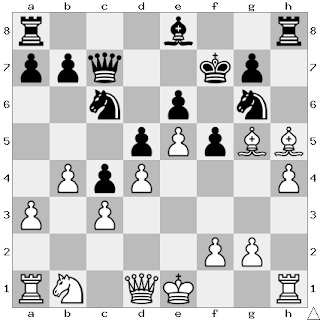 So here we have our first real area of interest in the game. White is a pawn up. White also has the Bishop pair. White has a winning position. That said, White still has work to do to maintain that winning position. White needs to ask himself the following questions once he realizes that his position is likely winning:

The first thing to realize is that the first and last bullets are out of the question. While it may appear that the Black King is not safe, it is not easy for White to execute any direct attack on the King as only the Bishops are near the Black King, and the Black King will be able to escape to g8 without any real issues. Also, with Black's pieces scattered and uncoordinated, it doesn't make sense to trade everything off, and this early in the game, it would be very difficult to do anyway.

So instead, we should be looking at the position from the perspective of what threats by Black should be prevented, and what improvements can be made in White's position.

So first, what are Black's potential threats, short or long term?

So what should White do? The answer is to do something about Black's two main threats. The sacrifice is a short term threat. The ...b5 and ...a5 idea, to break open the a-file, is a long term threat. White should take care of both of these on the next two moves.

This move by itself does not cost White his advantage, but it is a step in the wrong direction. White's King can claim some level of safety residing on f1 or g1, and it also removes any checks if Black decides to sacrifice on e5. With the g4 advance, this shield for the White King is gone. The other move that White needs to play is a4. This takes the a4-square away from Black, and if he advances ...b5 at any point, it's now White's choice whether to open the a-file by capturing or closing it by advancing the pawn to a5, and if Black plays ...a5, White can play b5, opening up the dark-squared diagonal, the color complex where Black's Bishop is missing. Therefore, White would be better off playing 15.a4 or 15.Kf1, and in reality, it doesn't matter which as White should play both in the next two moves while the Black King is likely to go to g8, and so here, White should play either 15.a4 Kg8 16.Kf1 or 15.Kf1 Kg8 16.a4 and White maintains a dominating position.

Now that the Knight on g6 is no longer pinned, White must watch out. Black has a nasty tactical threat.

From winning to slightly worse in one move! White needed to play 16.Kf1, the reason to which will be explained in the note to Black's next move.

Black has the tactical shot 16...Ngxe5!!. The Bishop on h5 is under attack. Therefore, White must do something about the Bishop, but with the King still on e1, if White takes the Bishop on e8, Black has an in-between move, and after 17.Bxe8, Black responds with 17...Nd3+! before recapturing on e8 and Black won his pawn back with interest! Therefore, White probably needs to play 17.Be2 to minimize Black's advantage, and then Black should play 17...Nf7, gaining a tempo on the Bishop on g5 due to the pin of the h-pawn to the Rook on h1, and therefore, Black will have time to recapture the pawn on f5.

While this removes the Knight and gives Black one less piece to be able to pull off a tactic on e5, it is not best. White should play 17.Bf3!, and now, if Black tries to take on e5, White has the capture of the d-pawn with check, and so Black has no in-between check as he has to get himself out of check first. 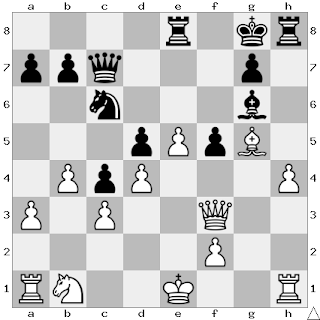 Can White take the pawn on d5?

This move isn't very good. The answer to the question about taking on d5 is Yes, White CAN take on d5, but it also leads to a very hairy mess after 19.Qxd5+ Bf7 20.Qg2 (only move) Nxe5 21.dxe5 Qxe5+ 22.Kd1 and while White is technically winning, it is more complicated than it needs to be. The simply 19.Nd2 is best. If Black goes for the sacrifice, the walk to d1 is safer, and if he doesn't, White can go to f1 as there is no mate on e1 since the Knight is out of the way of the Rook.

White is possibly overreacting to the possibility of ...f4 by Black. He should probably move his King via 20.Kc1, getting out of the way of his undeveloped Queenside pieces. If White wants to block the pawn, he probably should do it with the Queen, keeping the Bishop active, and avoiding a Knight blockage on e6 - if the Knight goes to d8, White can trade Bishop for Knight. 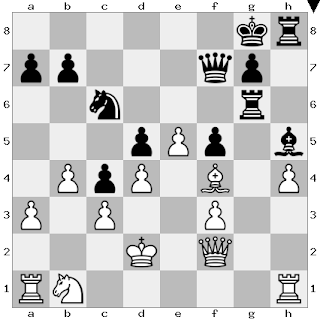 Now Black has a move that would equalize. Do you see it?

Black should take the opportunity to play 23...Nd8! as White has no way to avoid the blockading move, 24...Ne6!, which is the ideal square for the Knight.

Now we see a number of issues for White. Black is ready to blockade on e6. He is also ready to open the a-file, an issue we talked about earlier as a long term asset for Black if White doesn't do anything about it, which he hasn't. White realizes that his Bishop is too passive on f4, and therefore, activates it, realizing the Black will get one of his two desired goals, but not both!

Now Black has a choice to make. If he moves the Knight, he gets the desired blockade, but White will play 27.f4, avoiding the opening of the light squares. Otherwise, if Black advances the f-pawn, White will trade the Bishop for the Knight on d8.

Black goes for the attack on the light squares.

This hands the advantage back to White. Black can maintain equality with 29...Ra8! Remember we talked about the opening of the a-file. If the file opens, Black wants a Rook on a8 before the trade even occurs. 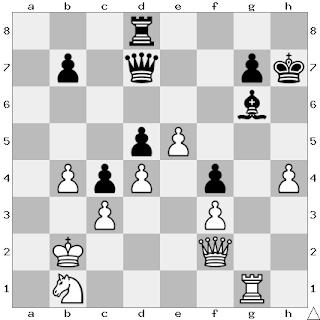 Only one move maintains the advantage for White here. Do you see it?

White must immediately attack down the g-file before Black gets time for moves like ...Qa4.

The simpler 34.Na3 is strong here, but this also works if White follows it up right.

Trading Queens first before this Rook move is the right approach for Black. White's advantage, if any, is minimal in that case. Here, White has a winning advantage again. 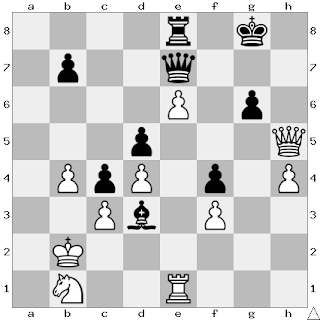 Once again, only one move is winning for White. Which move is it?

And now, with only 2 minutes for the rest of the game versus Black's 35 minutes, White falters once again.

Returning to the same position that arises from the 42.Qc7+ line. 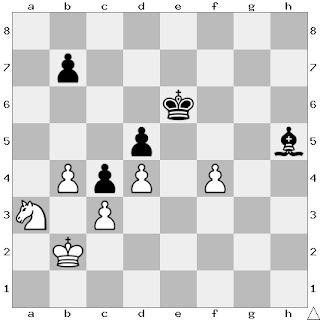 The game move gives Black one final opportunity at a draw.

Now, due to tactics, Black has no way to avoid losing the b-pawn, and with the White pawns on dark squares, there is no way to stop White from winning. It will take some maneuvering by the Knight, but the game is, for all intents and purposes, over. The rest needs no commentary.


In the end, White won, but many opportunities for Black were missed. The following can be gotten from this game:


This concludes this edition of The French Connection. Next time, we'll look at one more Advance French where this time, the topic will be trading off the wrong pieces, and the deception of bad Bishops. A Bishop that looks bad will end up being a key piece in the victory. That's next time, and until then, good luck in all of your French games, Black or White.
Posted by Patrick McCartney at 9:00 PM