A Trap Worth Knowing!

Hello everyone and welcome to the twenty-seventh edition of The French Connection, and also what is the first article of 2020. This article, and the next two in The French Connection series, will be covering the Advance Variation with differing ideas. In this one, I will be showing you a trap that is actually well worth knowing.

In most cases, when people ask about which openings have the most traps, my response usually is that looking for traps in the opening is not the approach to take to chess. In most cases, trying to set up a trap typically involves making a move that works if they don't see the idea, but otherwise, if they do stop it, the move proves to often be totally useless. What I am about to show you here is an exception to the rule. If you approach opening study from the opposite site, and try to study a system that is fully sound, and that system just happens to have a trap in it that some players not familiar with the French will actually fall for, only then is it worth analyzing, because in this case, you are still playing the best moves.

Without further ado, let's take a look at this trap that Black needs to be familiar with, and White needs to avoid. White was only a 1600-player, but this is precisely the level player that is most likely to fall for this trap. You typical expert or master that is familiar with the French Defense will not play this move when they are White.

We have a well-known position in the Advance French. At this point, White has two main responses. Personally, I think that 9.Bb2 is the far superior option for White, and is the move I would play 100 times out of 100 if I am White. That said, White decided to play the alternative option, and it is only in this line that the trap I am about to show you applies.

It is only with this line that the trap is available. 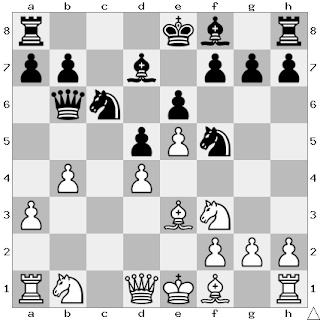 What move could look more natural? Unlike in the 9.Bb2 line, the Knight does not block any defenders of d4, and so White has three defenders to match up against Black's three attackers. So what can possibly be wrong with this move? The issue has to do with the c3-square itself. With the b-pawn and d-pawn advanced, the c3-square is very weak, and Black's attack will be centered around this weak Knight.

White was given the opportunity to get out of it by playing 11.Na4, attacking the Queen! Instead, White simply transposes to the line above.

Now, instead of 14.Qb3, White tries a different move, but it doesn't work, nor does any other move. White is already lost! 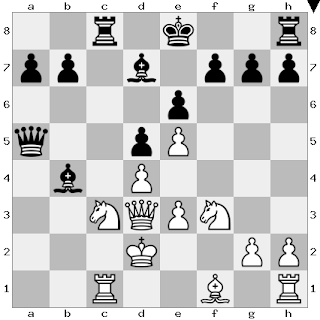 So Black is down a piece for two pawns at the moment, but White's pieces are all tied up. To untangle, White needs two moves with the Knight (Nf3-g1-e2), two more for the Bishop (g2-g3 and Bf1-h3 or Bf1-g2), and then getting the h1-Rook in the game, such as via Rc2 and Rhc1. This all takes way too long, and there are many ways for Black to win back the piece, maintaining the extra pawns. Black plays one of those moves here.

Because the King is on the f-file now, I played this move on the basis that I can stop the cheap-shot mate with the f-pawn instead of the g-pawn because taking en passant will be check! 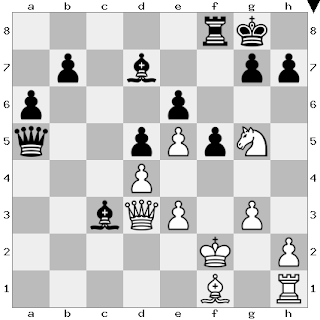 Ordinarily, I would say that Black is up two pawns with zero compensation, and end it there, but the way that Black finishes the execution is quite attractive.

White tries for one last cheap shot. Black will not comply! 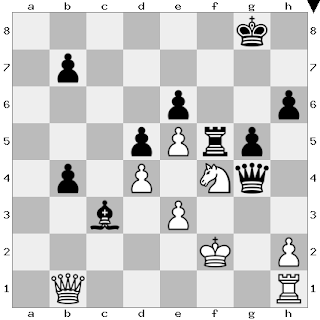 Can you find Black's best move?

Wait a minute? Doesn't this lose the Queen? Not so fast! It's actually the only move that forces mate!

While this is the obvious move, 30.Qxf5, while impractical, is the move that prolongs the mate the longest possible. Now a series of forced checks, each of which White has only one legal move, unpins the Queen and mates the White King.

Now White technically has two legal moves, but they both lead to mate in one with the same response by Black for both moves.


An absolute crush! All of this happened because of an innocent looking Knight move that is actually a blunder. Black did give White one opportunity to get out of it and should have taken on e3 followed by b4 immediately, but White failed to take advantage of it. The difference between this trap and the vast majority of other opening traps is that this trap does actually occur at the amateur level, and it results from Black playing best moves, not going out of his way to play an odd move simply to trick White. If that were the case, I would highly advise against playing in such a way because all you'd do is hurt yourself, but in this case, it's simply an added bonus to what is already best play for Black. Just remember, always assume that White will not fall for this, and be prepared to play the main lines with best play, whether that be 9.Bb2 or 9.Be3 followed by 10.Bd3. What we saw here is simply an added bonus that you might be able to pull off once in a blue moon against B-level players. Experts and Masters will not fall for this, and those below B-Level players often won't even get this far into the opening and likely do something inferior earlier on, such as 7.Bxh6, or even 3.exd5.

This was the first of three advance French games played in the first week of 2020. We will be looking at the other two in the near future, and the other two will not see White falling for this in the opening.

This concludes this edition of The French Connection. Good luck to all of you in your future French games, whether playing Black or White!
Posted by Patrick McCartney at 10:37 PM