Hello and welcome to the thirtieth edition of The French Connection. With this one, before we get to the main topic, I would like to bring up a topic covered recently. Those of you have have read Volume 27 of The French Connection that came out last month, the one subtitled "A Trap Worth Knowing", do you recall that trap? (Those of you that haven't read that article can click HERE to get to it.) Well, just recently, I had it come up again, and I would like to start by suggesting that you attempt to analyze yourself the moves played. I will briefly touch on it, but consider this to be more of a review of what was covered three articles ago, and I encourage you to try to calculate the moves in advance, especially up through move 27. Moves 28-onward are nothing more than winning a won endgame.

I had mentioned 16...f6 here in TFC 27, but Black has numerous winning options as White is already dead. The idea of this one is to threaten to double up, and entice White to retreat his Knight before breaking the center. White's next move is not forced, but notice he went right for it!

Basically the game ender! White is dead, despite the game being another 22 moves.

So as we can see here, that trap from TFC 27 really is one worth knowing. I had spent very little time in the opening phase of the game, and spent a grand total of 42 minutes for the entire game.

I figured it was important to mention this game with it happening literally 23 days after the first occurrence, but did not feature a full article on it as it would feel like I was merely re-writing the first one.


So now we move on to the feature game of the article. Here we will see Black play an early ...Bd7, which I am not in favor of at all. In this game, White decided to directly transpose to a line in the 5...Nge7 variation where Black plays ...Bd7 as a waiting move on move 8, but there is another idea for White which will be mentioned in the game.

After that, the game takes on a bit of a turn where Black focuses on getting certain pieces of White's off the board, and it leaves White with his Bishop that is on the same color as most of his pawns, but we shall see that this Bishop plays a vital defensive roll, especially after Black misses his one chance. First, it assists White in taking over the only open file, and then it follows up by keeping the Black pieces out while White proceeds to attack. Eventually, White infiltrates, and Black's position falls apart. With that said, let's take a look at the main game of the article.

I don't like this move at all for Black. With moves like 5...Qb6 or 5...Nge7 or the more modern 5...Nh6, Black is going for his main target, the d4-pawn. This Bishop move does very little at the moment. We shall see that the Black Rook doesn't get to the c-file until move 15. There is no threat of d4 any time soon, even with a discovered check if White plays Bd3 at any point, and with it being the light-squared Bishop, it has no way to directly contribute to the attack on d4. Does this move get played eventually? Sure! But White give White extra time to get his King to safety and consolidate his position before Black goes after d4? 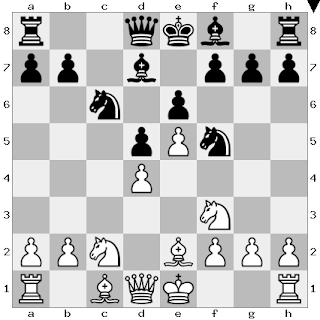 So we now have the position from the 5...Nge7 line mentioned in the note to White's 7th move. This position is normally thought of as being somewhat balanced.

More normal here is to castle first, bringing the King to safety, via 10.O-O. That said, with the Queen having moved, I decided to kick the knight immediately since it does not have Queen to cover h4, and so he will have to retreat. Now this is not a glorified intervention that gives White brownie points, as Black can, and should, re-route the Knight via e7 to g6. Black does not do this, and instead goes out of his way to try to re-post the Knight on f5, and goes out of his way on a mission to eliminate all of the White minor pieces that can harass f5. It makes the Knight look good, but the rest of Black's position will be very passive. But if Black goes to g6 with the Knight, even after the upcoming ...h5 push, Black should have a fully equal position, and so don't think that 10.g4 is some great novelty. It's merely another move that leaves the position roughly balanced.

This is the square the Knight belongs on.

Here is where Black starts his mission of eliminating both the White minor pieces that cover f5. He is going to be spending a lot of valuable time doing it. Meanwhile, White will be completing his development. That said, with White's long term weakness of the pawns being locked on the dark squares, Black will have one opportunity to take over the position. 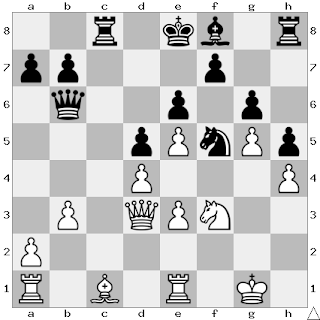 Now artificial intelligence highly prefers Black here, and I agree to an extent, but not to the same degree. Yes, Black has an attractive Knight on f5. Yes, White's pawns on the ones on the color of the Bishops, not Black's. However, there are a number of pluses for White.

Now a crucial decision for Black!

With the move order played, White will take over the c-file, and this will just add headaches to Black.

The Knight should go back to f5, tying White down to the defense of h4. From there, the Knight might look good, but it does not do the job it needs to do, and eventually, White will force it off the board, and overtake the game. Black's advantage is now gone! 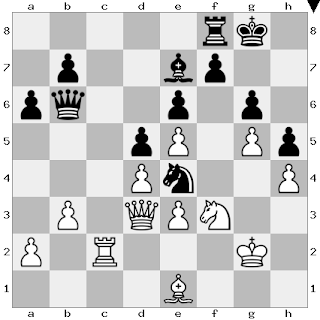 Black must be dreaming up some sacrifice on g5. Here, 26...Bb4 had to be played. Now, the Black Knight has no way to avoid being traded off after White's next move.

And suddenly White is better!

This pawn is now a major weakness for Black! He should have taken the Bishop on e1 instead, which was the lesser evil. White is still better after 29.Nf6+ Kg7, but it's hard to see how he will take advantage if Black sits patient. Yes, he has the e4-lever, but it is very hard to imagine that being enough to outright win the game for White.

Given the pawn structure, this is actually a very passive square for the Black Queen, and all it is doing is merely protecting the e4-pawn for now. That is about to change.

White infiltrates to the 7th rank. This is just the tip of the ice burg of Black's upcoming problems.

Go away Rook! We don't want you here! 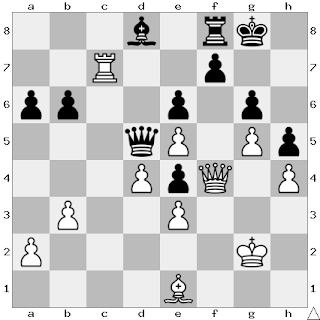 It is White to move. What do you do here?

Now you listen to me! I am not going away any time soon! Careful analysis shows that there is no way to trap the Rook from here! Black may be able to untangle at some point and trade the Rook for his own Rook, but with Black having to cover e4, he doesn't have time for something like Qd5-c6-c8-b8 as once it goes to c8 and abandons e4, White can play Qxe4 and then come in with the Queen as well. In addition, if Black does that immediately via 34...Qc6??, White wins material with 35.Bb4! since the Rook can't move to e8 as it would then be mate in two from that point!

So Black proceeds to stop 35.Bb4 with this move. That said, it opens up the light squares for the Queen, and the Queen can come in via a6 if he has to, and so there clearly is no way to trap the Rook.

The Queen did its job on f4, keeping the Black Queen at bay on d5 until Black voluntarily weakens his pawn structure. Now the Queen is coming around the back and coming in.

White has no objection here to a Queen trade. If Black decides to go that route, White will have a central pawn roll eventually, combined with the more dominant Rook. This is sufficient to say that White would be clearly winning.

And so Black doesn't trade Queens. However, it cannot be a good sign when you are retreating backwards. While Black is stuck for moves, White takes his sweet time now to collect the e-pawn.

Not allowing any sacrifices on g5.

Virtually forcing the Queen trade, but in such a manner that White continues to control the only open file. Black could safely resign here.


Here's what can be picked up from this game.

Well, that concludes this edition of The French Connection. Til next time, good luck in all of your French games, Black or White!
Posted by Patrick McCartney at 2:56 PM