Hello and welcome to the twenty-third edition of The French Connection. Here we will be continuing with the third round of the Bottom Half Class Championship, and it will feature a line of the Advance Variation where Black goes out of his way to trade off the bad Bishop. The main difference between the offbeat line I gave in the repertoire against the French Advance back in 2017 and the line played in the game is that here, Black uses the Queen to cover b5 before playing Bc8-d7-b5, and so if White trades, Black has to take with the Queen. In the line with ...a6 instead of ...Qb6, Black gets the open a-file in return.

The line played in this game was once popular back about 20 to 30 years ago, but today it is thought of as being too slow for Black. White does not respond with one of the two main tricks that makes this line dubious, and part of it is situational. White was playing his third game of the day, and is coming off a painful loss in round 1 and a loss coming from horrible play in round 2, and is now facing an opponent that is almost 350 rating points lower, and so White takes a more conservative approach, figuring he can win via positional understanding, and after passive play by Black, White gets the attack in gear. The main thing to see in this game is that White's attack is not the traditional attack on the Kingside, as would normally be the case with the direction the central, blocked Pawns point, but rather, we will see White execute his attack on the Queenside. When Black plays overly passive in an opening where he starts out with a space disadvantage (normally Black's only real downside to the French Defense), it virtually gives White the entire board to execute his attack.

Without further ado, let's see what happens in our feature game.

Here, however, Black is best off playing 5...Nc6 and returning to the main line. This line was once popular many years ago, but it is now viewed as too slow for Black. 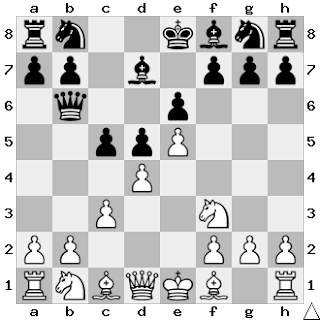 There are four main lines here for White, and given the tournament situation, White goes for the most simplistic, but it should also cause Black the fewest problems.

This is White's main response. White has two other interesting responses here.

That said, while the line played in the game may be the least challenging for Black, it is still better for White than the main line with 5...Nc6. Long story short, leave the c8-Bishop at home early on in the game. 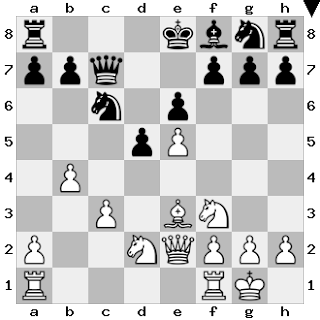 While White has not completely removed Black's castling rights, he has slown Black down from being able to do so, and he should now break open the center immediately. 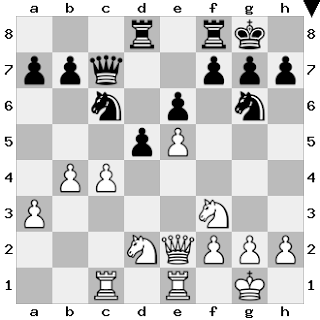 This was Black's one chance to take advantage of White's error on move 15. You need to have a clear positional understanding to see this one. White's main advantage is the Queenside majority. Black shouldn't let White either advance, or else exchange on d5 in circumstances that force him to take an isolated pawn. Black can eliminate both possibilities by playing 18...dxc4! and after 19.Qxc4 Qb8 20.Qc3, Black is slightly better as now it is now all centered around the e5-pawn, which in this case is more of a weakness than a blockading strength. Now White gains a significant advantage.

The only move that keeps the advantage. If White plays 19.c5 first, then 19...a6! ruins the party for White.

Now Black is in serious trouble on the Queenside.

White has no reason to rush here, and so he takes away the f4 and h4 squares from the Knight on g6.

Black is walking right into a nasty trap. He needed to at least try to create some form of activity before getting suffocated by White. Relatively best was 23...axb5 24.axb3 Qa3, though White still has a significant advantage.

Just waiting for Black to self-capitulate by simply moving his worst-placed piece rather than trying to make a "loud" move.

Just the move White was waiting for. Relatively best was still to trade pawns on b5, but White has improved his position the last few moves, and Black has not!

Now that the Rook can't retreat to c8 as his counterpart now occupies that square, White wins material.

Black refuses to sacrifice the exchange with 25...Rc6 with the ability to block White's Pawns in return, but the move played is even worse. 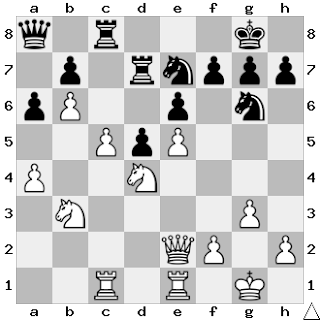 This forces the break through. There is no way for Black to block the White Queenside Pawns now. If Black ignores the c-pawn with 26...Rdd8, then 27.c7! Re8 28.a5 leads to total paralysis for Black and all he can do is watch White destroy him. However, no matter how many times Black tries to take on c6 without taking via the b-pawn, White will eventually force the issue and the a- and b-pawns will destroy all hopes for Black.

Can you possibly think of a better square for a Knight?

Not that anything else saves Black, but this officially drops the c-pawn as well. Black can safely resign here.


The main thing to get out of this game is understanding that the French Defense cannot be played passively, and attacking the French also cannot be done passively, despite the appearance that both sides have time based on the blocked center. It doesn't take much for Black to gain a positional advantage, and when given the opportunity, sometimes White needs to blow up the center immediately without hesitation. That said, aside from his one mistake on move 15, White took advantage of Black's passive defense. The line with 4...Qb6, 5...Bd7, and 6...Bb5 is already viewed as being under a cloud these days because of its passive nature, and so if you are going to play like this as Black, you have got to be alert and on the lookout for mistakes by White, which Black failed to do on move 15 - his one and only opportunity the entire game.

I would suggest those playing the Black side of the French ought to avoid this line completely, and those of you playing White must find active moves to keep the advantage as while 3.e5 blocks the Bishop in on c8, claims a space advantage, and is easier for White to play than the more theoretical lines with 3.Nc3, White must always remain active as his advantages are short term, not long term. Black, on the other hand, simply needs to remain active enough to keep the pressure on White's center and not allow White to roll him over with Pawns like he did in this game, but get some pieces off the board and eliminate his own weaknesses without getting his King demolished and Black will usually enjoy the better endgame in the Advance French. The only scenario that Black needs to avoid is a White Knight versus his Light-Squared Bishop and all other pieces traded off.


This concludes this edition of The French Connection. Till next time, good luck in all of your French games, Black or White!
Posted by Patrick McCartney at 6:55 AM