Hello everyone and welcome once again. The first thing you might notice is that this article is unusually short. There is a reason for that. This game was so bad that there really is only one spot in the game worth analysis, and the only reason I included it is because it does point out a very important factor in chess that many amateurs completely ignore. Otherwise, this is by far the worst game of the road trip! Yes, worse than the final round in Des Moines that I showed previously with numerous errors!

We will see a Fianchetto King's Indian, like we did in Round 1 of the Des Moines Open, but this one will be reached via a different move order, which will also illustrate a portion of the main point of the article. Further detail on this can be seen in the note to Black's 12th move.

A word of note about move order. In the "normal" King's Indian Defense, this line would typically arrive via the move order 1.d4 Nf6 2.c4 g6 3.g3 Bg7 4.Bg2 O-O 5.Nf3 d6 6.O-O c6 7.Nc3 Qa5 8.e4 on the assumption that White were to castle here on move 8. Notice in the first game of the Des Moines Open, Black played 7...Bf5 rather than 7...Qa5. Both are lines in the Fianchetto King's Indian, but the move order played, with the early e4, does not allow Black to play that line, and so I decided to play the line I used to always play, the 7...Qa5 line. This illustrates one very critical factor when studying an opening. Do not simply select a single line at random, memorize the moves, and then think you are set! You have to look for preventable moves. The move ...c6 is not preventable by White barring doing something completely stupid, but the 7th move options by Black can be prevented, particularly via the English Opening move order, and so when you study an opening, you have to know all the odd move orders that can lead to it, and make sure you have those move orders covered. It is for this reason that I have studied all of the 6...c6 lines of the Fianchetto King's Indian, and not just the 7...Qa5 or 7...Bf5 line. This is why it's critical to understand the ideas behind the 6...c6 lines of the King's Indian (or whatever lines you decide to play) and not just memorize lines, as if all you did was memorize, you'd be clueless at this point if all you did was memorize the 7...Bf5 line.

Keep this position in mind when you reach the diagram below after White's 12th move. 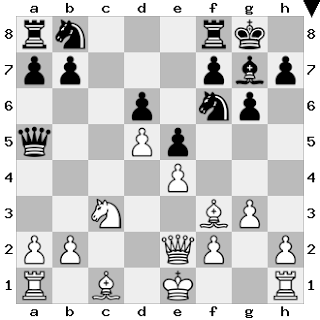 So the difference between the line given in the note to White's 8th move and this position is that here White has played the passive Qe2, and has not castled. He lags behind in development compared to the main line, and the Queen can't come to the active square b3. This often leads to a kind of temptation, and that's what happens to Black here in this game. It is very important to note that in closed, blocked positions, the loss of time is not nearly as critical as wide open positions. Instead, Black should adjust the order of his moves to make White pay for the mis-placement of the Queen. For example, playing 12...a6 here is probably best, preventing the Queen from coming to b5, and follow that up with the ...Nbd7 and ...Rfc8 idea. Black's upcoming 12th move isn't outright losing, but what Black does shortly after that is!

White continues to play passively. It is here that Black starts getting into serious trouble.

Why not 15...a6? Again, the whole idea is to keep White passive. You are not going to successfully blast White simply because he has a passive position. The position is too closed for that.

Why? The Knight on f6 is restraining the Bishop from coming to g4 and expanding on the Kingside and along the h3-c8 diagonal. Why is Black moving it over to the Queenside. Again, it was all about temptation. Passive Queen on e2 and lack of activity on the Queenside and Black goes bonkers and tries to blast the Queenside when there is nothing there. Once again, 17...a6 is probably best.

Really? What is Black trying to achieve here? He is not going to blast White on the Queenside simply because the Queen went to e2 rather than b3. White is now winning, and you will see that the moves for White were not hard to find at all. Simple chess wins the game for White.


A completely rotten game, and one that should never be repeated! The main thing to learn from this article is two-fold. The first is that it is critical to understand an opening and not just memorize a line or two, and move order tricks must be accounted for. I was successful from this aspect. The second thing to learn about this article, and this is where I completely failed, is that closed positions are not the same as open positions. In open positions, a couple of slow and/or passive moves can often lead to a successful blast by the opposing player, but in closed positions, such ideas rarely ever work, and the way to beat a player playing passive moves is to take the extra moves to prevent any possibilities for the opposing side, such as playing ...a6 in the game, which Black never did, and gradually expand as long as the opponent continues to play passive and do nothing. He likely won't see his King get mated in 25 moves, but slow and steady expansion by the opposing side will eventually paralyze and ultimately suffocate the side that is constantly playing passive moves. Do not be tempted into unsound garbage when faced with slow, passive play in blocked positions.

This concludes this article on the second round of the Bottom Half Class Championship. An absolutely rotten start for me, being 0 and 2 after two rounds, but yet I manage to turn things around and win the Under 2000 prize by winning the final three games of the tournament, the first of which is what will be seen next.

Until then, good luck in your games.
Posted by Patrick McCartney at 6:20 PM