Hello everyone and welcome. Those that have followed the previous five posts will know that I am covering the games from my two week road trip. The first of the two tournaments was in Des Moines, IA, and the five games from the Des Moines Open have been analyzed in those five posts. We now move on to the second half of the road trip, which was the 2019 Bottom Half Class Championship in the state capital of Lansing, Michigan. The name of the tournament refers to the geographical bottom half of Michigan, as opposed to the upper peninsula (or "U.P.") of Michigan, not the level of players. Actually, this tournament featured a tougher field of competition. In Iowa, I was the 6th seed out of 39 players in the top section. Here I was the 9th seed out of 16 players in the top section. Overall attendance in Michigan was about double that of Iowa (120 vs 62), but there were also six sections as opposed to only two in Iowa, and so the sections themselves were smaller. So the competition was definitely more of an uphill climb than Iowa was. Turns out, I give my opponent a run for his money but come up short in the first round, and play absolutely horribly in round 2. Those of you that read the articles from the Des Moines Open, you think my play was sub-par in rounds 2 and 5? You haven't seen bad until you see round 2 of this tournament! Then I literally bring up the rear and win the final three games to end up with the Under 2000 prize. We will see rounds 2 thru 5 in the following four articles, but for now, let's take a look at round 1.

White can try 4.Be2, looking for the trade, or the adventurous 4.f3, which plays more into Black's hands where he is looking for White to weaken himself in order to pull off some tactical shot and looking to win in 25 moves or less, but this approach is simply a safe line, and after one more move by each player, reaches a position that can also arise from the 2...Qxd5 variation, specifically via 1.e4 d5 2.exd5 Qxd5 3.Nf3 Bg4 4.Be2 Nf6 5.d4.

This is the more dynamic option for Black, going for an immediate attack on the d-pawn. The more solid approach is 5...e6.

This move is not bad, and by no means what lost the game for White, but it can be viewed as being a tad over-committal, already telling Black where the King is going, and removing an option for White when Black strikes at the center. Better is to over-protect with 6.Be3, answering 6...O-O-O with 7.Nbd2 Qf5 8.c4 e5 with 9.dxe5 Nxe5 10.Qa4 with ideas of castling Queenside. Here we are going to see White not have that option, and have to deal with a Black pawn on e4 the entire game. 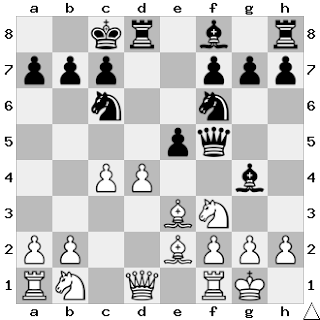 So the main difference between the line given at White's 6th move and here is that White is castled rather than having his b1-Knight developed to d2, and this makes a major difference as White is now going to be forced to advance and play with each side having a pawn majority on the side of the opposing King rather than trade the dangerous Black e-pawn off and castling Queenside. That said, White is not by any means worse here, and is actually still better, but he is having to take a riskier approach than if he had played 6.Be3. 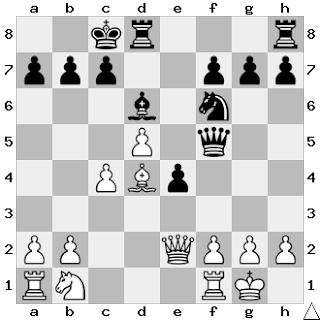 This move is a positional mistake. White had feared the Greek Gift sacrifice, but it doesn't work. After the far superior 13.Rd1, White has the advantage, and attempts at the sacrifice fail for Black. After 13...Bxh2+? 14.Kxh2 Ng4+ 15.Kg1 Qh5 16.Qxe4 Nxf2 17.Bxf2 Qxd1+ 18.Qe1 and White has a near winning advantage, whether Black trades Queens or not, the two pieces are far superior in this case to the Rook and extra Pawn. For example, after 18...Qxe1+ 19.Bxe1 Rhe8 20.Nc3 followed by 21.Bf2, all critical entry points are covered.

Better is 15...exf3 and Black is then able to maintain equality and maybe even a small advantage after the forcing sequence 16.Qxe5 Bxe5 17.Rxf3 f6. 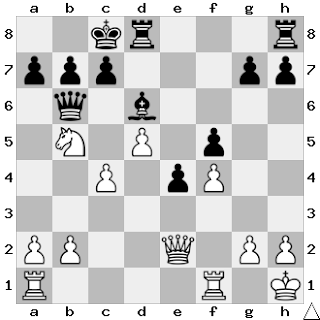 Just about any normal move except this one gives White a slight advantage. He could play 18.Rab1, 18.Rad1, or even a radical pawn sacrifice with 18.b4 Bxb4 19.Rab1 a5 20.a3 with compensation for the Pawn. But here, White is surrendering the b4-square and Black can plug it up instantly and cease White's attack.

Black should play 18...a5 followed by putting the Bishop on b4, sewing the Queenside shut and then attacking the White King. Now White has a clear advantage if he finds the right moves.

So far so good for White. Now the final hurdle. Only five moves make any sense at all here. Attacking the Queen with one of the Rooks, or one of three Knight moves. One leads to an advantage for White. One leads to an equal position. The rest lose. Which move do you play? 21.Rab1, 21.Rfb1, 21.Na7+, 21.Nd4, or 21.Nxd6+? 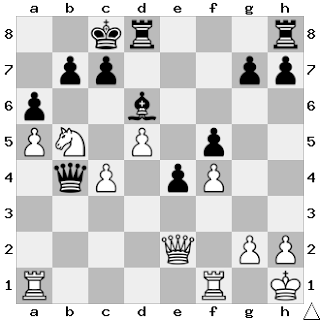 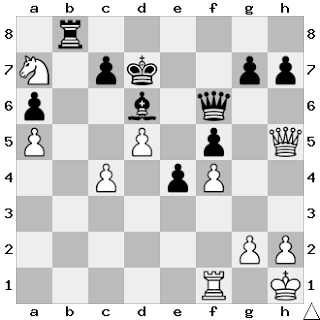 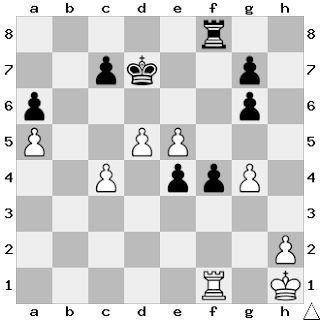 This endgame is basically won for Black. His pawn phlanx on e4 and f4 is far stronger than White's on d5 and e5. Both sides for the most part play the best moves at this point, one exception being White's 46th move due to time issues, but play through the moves and observe the endgame play and think about the alternatives at each move for White, and you'll realize how helpless White really is in this position.

After the game move, Black's task is pretty easy.


In some ways, a heartbreaking loss for White after having the opportunity to beat the top seed on moves 21 and 23, but even after that, it was move 26 that killed him. The biggest thing to pick up from this game is that understanding compensation is more important than getting your sacrificed material back. In essence, that's what White in that sequence during which he missed two golden opportunities. He regained his Pawn that he correct sacrificed on move 20. Thorough self-analysis of the final 28 moves by each player along with the line noted at White's 46th move is also a great way to brush up on your Rook endings as every move except White's 46th is pretty much correct. Different engines may give certain other moves in a few cases an extra couple of hundredths of a point, but the difference between say, -1.35 and -1.38, is irrelevant. What's important is that until White's 46th move, Black kept the advantage he had, and White kept Black from widening it and made Black continue to make the best moves, which is all White could do.

So unlike Iowa, I started this tournament with a loss, and next time, we will be looking at what was probably my worst game in the entire road trip. As mentioned before, you think rounds 2 and 5 were bad from Iowa? You haven't seen bad until you've seen this one, and that's what we will be covering next time!

Til then, good luck in your tournament games!
Posted by Patrick McCartney at 8:21 AM