Hello everyone and welcome as we continue to cover the games from the 2019 Summer Road Trip. Here we will be covering the fourth round of the Bottom Half Class Championship in Lansing, Michigan. Coming into this game, I started out with a pair of losses before annihilating the French Defense in round 3. Here I have White again, and I walked into the final day with the mentality that I must win the last two games to have an outside chance at anything. Poor opening play will see White get a winning advantage early on with ownership of the center and the Bishop pair. Then White starts making errors, going from won, to better, to equal, to significantly worse and possibly lost, but a fatal error by Black in the endgame turns the tables, and White doesn't look back from that point onward.

Let's see what we have here for the fourth round.

A fairly passive way to decline the King's Gambit. More active are 2...d5 and 2...Bc5. With this move, White will set up his pieces in similar fashion to that of the Closed Sicilian, the difference being Black has a pawn on e5 instead of c5. This benefits White as the dark-squared Bishop is blocked, whereas with c5 pushed instead of e5, Black can fianchetto his King's Bishop on the open long diagonal. But here, with ...e5 pushed, what difference does a3-f8 or a1-h8 make for the Bishop? Both diagonals are blocked by his own Pawns. With this closed and passive structure with less space, White has time to pretty much do whatever he wants, and what we will see here is a setup by White that is similar to White's structure in the Closed Sicilian.

Either now or in the very near future, Black will have to play this move. If White castles and then advances f5 with the light-squared Bishop still back on c8 or d7, Black will have many problems with the cramping effect. In these positions, the light-squared Bishop often has no good place to go, but trading it for a Knight, like in this game, gives White the Bishop pair, which leads to other issues for Black.

This move allows White to force Black to give up his Bishop for a Knight. 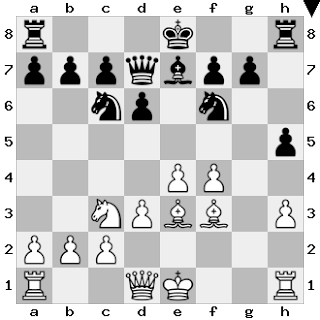 At first glance, you are probably thinking that Black is better because of his slight lead in development as he is ready to castle and White is not. However, a closer look will see that White has a significant space advantage, White has the Bishop pair, and White has a strong Pawn phlanx on e4 and f4 that is difficult for Black to disrupt. For example, playing ...d5 simply drops a pawn while a move like 11...Nh7 might appear to threaten 12...Bh4+, but White can simply play 12.Kd2! as the King is perfectly safe there with there being yet another Black piece moving away from the center. Artificial intelligence even goes as far as saying that White has a winning position here!

In essence, Black admits that his 12th move was a total waste of time. 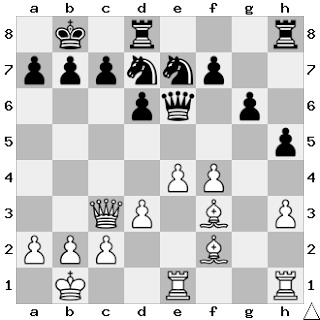 So far, so good, for White at least. While it may be true that not every move White made was the computer's first choice, he hasn't done anything yet to lose the winning advantage, and the difference between say, 1.81 and 2.06 is negligible. However, this is where tables start turning and White fails to execute the attack.

If you think about it, this move makes no sense at all. White's Queen is not inactive on c3, White has a space advantage, White has the pair of Bishops which are both unopposed, his pawn structure is healthy, and other than the connecting of the Black Rooks, all Black's pieces have done nothing more than a meaningless shuffle. Therefore, it makes sense for White to execute the attack, and one good way to do that is with 20.a4. Those of you that attend Peter's Tuesday night lectures will know that he covered this idea recently, only his example was both Kings castling Kingside and advancing the h-pawn. In this scenario, both Kings castled Queenside, but then moved to b1 and b8, leading to a symmetrical scenario to both castling Kingside, and White now advances the Rook Pawn on that side. White's Bishops point to the Queenside, and a timely push of the e-pawn can lead to a fatal attack eventually with the pressure of the Bishops, Queen, and Pawn. Another possibility is to pressure the dark squares with 20.Bh4, pinning the Knight to the Rook with an eventual attack down the center. In either case, White should be going for a full-fledged attack and not be trading down to an endgame, which violates all general principles about what to do with a space advantage and active pieces versus a lack of space and passive pieces.

Another inferior move by White. What is the point of this move? Even if Black exchanges on e4, there is no entry point for the Black Rook on d8, and so what are we contesting? The Rook would be better on e1 behind the hanging pawns. Instead, White should be improving his worst placed piece with a move like 23.Rhg1.

Black would be better off keeping the tension with 23...c6.

Like Black's 23rd move, White should keep the tension on the board and play 26.Rhg1. If Black proceeds to release tension with 26...gxf5 27.exf5 Nxf5 28.Bxh5, the position opens up, which favors the Bishops, and White gets the outside passer, in which passed Pawns are the exception to the rule. While controlling squares with pawns favors central Pawns, passed Pawns favor the one on the outside because it becomes a longer distance for the King to go to chase it down if it comes down to a King and Pawn ending. 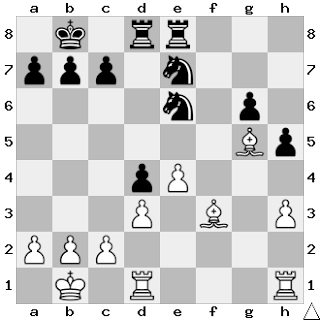 Back on move 20, White went from winning to better, and here, White does something really stupid that eliminates almost all of his advantage.

Black is the one with the weaknesses, such as g6 and the space deficiency. Why is White retreating? White can still maintain a fairly significant advantage by remaining active via 28.Bf6! Normally it is not good to have your Bishops lined up on an open file, but here, 28...Rf8 doesn't do anything because of 29.e5.

This move makes absolutely no sense, and hands the advantage to Black. White needs to open the position for his Bishops, not trade more pieces off. 32.b4 is better here, breaking up Black's Pawn chain and opening up lines. 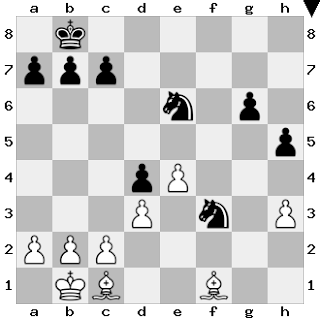 Under normal circumstances, a pair of Bishops ought to beat a pair of Knights in an open or semi-open position with Pawns on both sides. This, however, is not a normal circumstance as the White Bishops are useless, and are reliant on an error by Black, which it turns out, didn't take long for Black to do.

Here is Black's first mistake, going from winning to barely better. Black should protect the Pawn the other way with 38...Ne5!, intending 39...g3. The counterpart on e6 keeps the Dark-Squared Bishop out of f4, preventing harassment of the centralized Knights. By the time the Bishop can get to say, g3, the Black King has joined the Knights and Black has a winning position. Here, one has to pay attention to the unfortunate position of the Knight on h2 compared to the King on b8. Now getting the King to d6 does nothing as a Bishop on g3 would still fork the King and Knight, and we are about to see one more error made by Black that turns out to be fatal due to tactical threats involving forks and pins by the Bishops. With 38...Ne5 and proper follow-up, White's Bishops wouldn't come back to life like they do in the game.

Now Black is lost! The only move that maintains a slight advantage for Black is 39...Kc8, and moves like 39...Nf3 or 39...Kc7 maintains equality, but the game move fails tactically.

Literally the only move that doesn't lose for White, but not only does it not lose, it wins outright for White! The immediate threat is the fork on g3 and there is no way for Black to save the Knight as it's trapped on the edge of the board.

So Black keeps the Pawn, figuring that even down a piece, the g-pawn is his main trump and must be kept.

Of course, Black's goal is to keep the Bishop away from g2, not allowing it to go to f3 or h3 (via g4). The Dark-Squared Bishop on h2 can't harass the Knight as then the Pawn promotes. That said, it's not enough as either the King will arrive in time, or else another tactical error by Black will allow White to get at the Pawn.

While the White Bishop can't harass the Knight, it can still harass the loose Pawns on the Queenside as the c5- and a7-pawns lie on the same diagonal as the promotion square, which is the main thing that must remain covered, or occupied, as is the case here.

Now, even if White has to give up a Bishop for the g-pawn, the extra Pawn for White gives him a winning position in what would become a Bishop vs Knight endgame with two extra Pawns for White. Turns out, it never gets that far as Black is soon about to move the Knight, which will allow White to get the g-pawn for nothing.

There was no real reason to move this piece as it still can't be taken due to promotion. Now the win is extremely easy for White.


An ugly game to say the least. Here are the main things to get out of this game:


That concludes the coverage of the fourth round. I went into the final round with a score of 2, and actually have a shot at getting money, believe it or not, though it requires a win with Black as I've had three Whites in four games thus far, and coverage of what happens that game is what will come in the next article, which will come under the French Connection series. Till then, good luck in all of your games.
Posted by Patrick McCartney at 6:12 AM