Hello everyone and welcome to the thirty-fourth edition of The French Connection. In the previous edition, we saw a game played by Wolfgang Uhlmann from the Black side of the King's Indian Attack where because of a very aggressive move by White, Black had to play a strong defensive move where if he didn't actually understand the position, and simply played routine moves without paying attention to what White was doing, and played the "automatic" 13...a4, his position would have been worse.

This time, we are going to see another game played by Uhlmann with yet another line where a different 13th move by Black is possible, and better, than the automatic 13...a4. 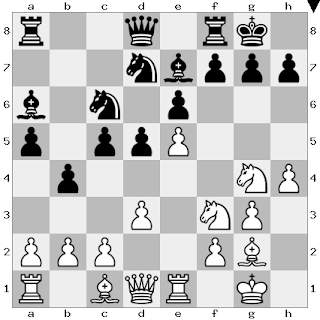 It is critical to understand why this move works. White's other main option back on move 13 is 13.Bf4, against which, I would suggest the stereotyped move, 13...a4. The difference has to do with the Knight on f3. With his counterpart being on h2, the move 13...Nd4 is not as effective because after 14.Nxd4 cxd4, White can immediately apply pressure with 15.Nf3, hitting d4, and also preparing to eventually go to g5, which we saw in the previous article can be very aggressive and dangerous.

With the Knight on g4, White instead has to make a critical decision. Does he take on d4 to try to damage Black's pawns? Or does he ignore the Black Knight and play a normal move?

White can also take on d4, which does double Black's pawns. However, they are covering many important squares and can be hard to get to. It should also be noted that Black has the semi-open c-file, and White has to be on the constant lookout for his c-pawn. A good example featuring 14.Nxd4 would be Dragan Glavis - Ladislav Havas, Croatian Championship 1999. The move order is slightly different, but it directly transposes to 14.Nxd4 cxd4 15.Bf4. It isn't like the entire game is centered around the c2-pawn, but Black probes weaknesses, such as enticing b3 from White, weakening the dark squares, which he uses to infiltrate with his Queen, and then once White pushes c4, Black relies on his more active pieces from the time he gained in the middlegame to win the heavy piece endgame.

Black decides to remove the Knight that is likely to want to go to g5 eventually, which can be a dangerous piece to the Black King.

An alternative is 14...Nf5, keeping pieces on, and having the Knight act as a strong defender. For instance, it becomes harder for White to advance g4 as the h4-pawn will hand in most cases unless it has previously advanced further up the board, but then the White King could also get a little airy with an extra Black piece on the Kingside that normally wouldn't be there. If White tries to play normal moves, such as 15.Bf4, it won't get him anywhere. There is no real way for White to make progress without contesting that Knight on f5. If White plays 15.Bf4, and eventually follows up with a later Ne3, given that a trade on e3 would likely cause the Bishop to recapture, since recapturing with the Rook would in most cases look silly with the given pawn structure, it would lead to the Bishop simply wasting a move. This leads to the question of the immediate contesting of the Knight with 15.Nd3. Play could follow with 15...Nxe3 16.Bxe3 h6 17.Rb1 Rb8 18.Qd2 Qb6 and Black is perfectly fine as sacrifices don't work here for White. After 19.Bxh6? bxc3 20.bxc3 Qxb1 21.Rxb1 Rxb1+ 22.Kh2 gxh6 23.Qxh6 Bxd3, Black is winning as White has no breakthrough and Black has a significant material advantage, despite lacking the Queen.

Now that Black has eliminated the dangerous White Knight that could go to g5 at any time combined with his loose Knight on c6, and having moved his Rook off of a8, he has eliminated all tactics for White along the long diagonal, and now continues with his queenside operations.

This assures at least some form of opening of the Queenside.

White tries to keep it shut down as much as possible. 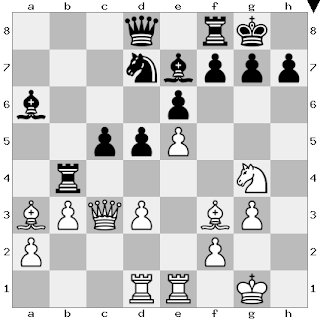 White has regained the pawn, but the fun has just begun for Black. See if you can find Black's next move.

The tactical point behind Black's last move is that 23.Bxb4 can be answered by 23...d4! White may be best off taking the Bishop and giving up the Queen. Instead, if White moves his Queen, Black gets all of his material back starting with 24...Bxf3, subsequently gaining another exchange. Otherwise, 24.Ba5 Qb8 and White has the same problem. This is why White didn't take the Rook.

Now that the Queen has moved, Black must move the Rook, right?

No! We still have the scenario where if White takes the Rook, then 24...Bxf3 gains the full Rook back (or else two minor pieces).

Black now proceeds to shuffle his pieces to better locations. The way to figure out how to go about this is to figure out what Black ultimately is trying to achieve. The first thing to identify is Black's biggest weakness, which in this line is typically the King, and in this specific position, it's h7. Therefore, he wants to swing the Knight to the Kingside, either to f8 to guard h7, or to g6 to block h7. The attack is still on the Queenside, and so if the Knight along with the Bishop on e7 can take care of the defensive tasks, then the heavy pieces can be used for the Queenside attack. He starts by attacking a2. Once it moves, b3 becomes weak. If he can get in on the 3rd rank, and grab the b- and d-pawns, he will have connected passers, and then the only important thing is to be able to defend the Black King and Black will win.

Black first eliminates one of the attackers of h7. It's not like Black's Bishop was doing much beyond contesting the White counterpart. We will see this followed up by combining an attack on the Queenside pawns, and relocating the Knight for defensive purposes on the Kingside.

Opening up f8 for the Knight! 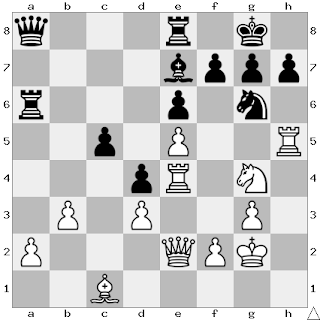 Mission Accomplished! The Knight is in the way of White's attack, and the pressure is applied down the a-file. Next thing to consider is how else can White attack the Black King? The only way that could maybe cause a few headaches for Black is down the h-file.

It might look tempting to play 31...f5?, but it doesn't work. After 32.exf6 gxf6, there is the perception that White has to worry about 33...f5 due to the pin of the Rook on e4, and the fork of the Rook and Knight on g4. Closer observation would see that only one of them is really a threat, and that's the pin of the Rook. Therefore, White can answer with 33.Kh2! when 33...f5 34.Nh6+ (Oops!) followed by 35.Nf7+ or 35.Rxe6, depending on where the King goes, and White is winning. Therefore, Black instead continues to pressure the Queenside.

White uses tactics and tricks to validate his move. 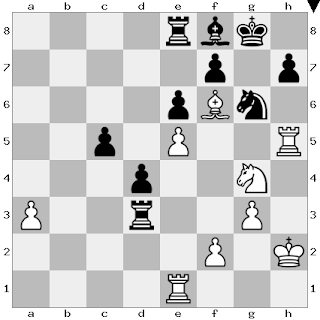 Time for another re-assessment. The Queens are gone, which helps in defending the Black King. White clearly wants to double up on the h-file since if White can grab the pawn, and completely open the h-file, h8 is covered only once, and so White can mate the Black King with an open h-file if everything else remains as it is. The Bishop covers any checks with the Knight, and the Knight covers h8 once. Therefore, if Black can get rid of one set of Rooks, and have the Knight on g6 not be disrupted, the connected passers on the c- and d-files should be what wins the game for Black. Therefore, how do we get rid of one set of Rooks?

Headed for f5, offering the trade of a set of Rooks.

Of course White has no interest in trading.

Under normal circumstances, it is said that you do not advance pawns on the side in which you are weak. However, here we have determined that all we need to do to defend our King is exchange one set of Rooks, even if that means giving up a pawn as long as it's not one of our two connected passers. Therefore, with only one White Rook, the h-pawn is unimportant.

Black goes on with his own business and sacrifices the meaningless h-pawn. For White to take it, he must offer a trade of one set of Rooks, which is all Black needs.

White offers the Rook trade because without taking the pawn, what progress can he ever make if the h5-pawn is a permanent block of the h-file?

Seeing that he is getting nowhere with his current setup, White has to do something. Black, of course, cannot blindly advance the pawns and must stop all cheap threats, and therefore he takes the time to relocate the Bishop to cover f6. 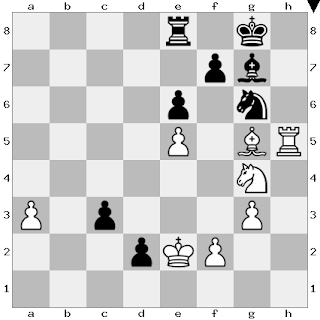 Clearly Black is winning, but the pawns can't do it alone. Last phase is to get the pieces in without getting his own King killed. The Rook is clearly free to move, and once the White Rook is forced back to defend, the Knight will come into play as well while the Bishop stays with the King for defense.

Now White plays a series of checks, but there is no perpetual.

It is basically game over at this point.

White resigned as there is no stopping ...c2 on the next move and promotion cannot be stopped. White will lose his Rook, and subsequently the game.


So once again we see the connected passers on the c- and d-files decide the game. This is not unusual in scenarios of the KIA vs French in cases where Black wins. The connected passers is a fairly common goal for Black in this line. But the important thing to keep in mind, just like what was emphasized in a number of other recent articles, is that you cannot play on auto-pilot and expect to succeed. Once again, Black delayed the common 13...a4 move in favor of an idea that was mainly possibly because Black understood that consequences of White moving that h2-Knight to g4 that quickly. In addition to it once again showing the importance of paying attention to what your opponent is doing, even in openings normally thought of as openings where you can go on auto-pilot for the first dozen moves or so, it also once again illustrates the importance of understanding the opening you play, not just memorizing it. We saw two fairly uncommon 13th moves in the last two articles, namely 13...Qe8 and 13...Nd4, but it also needs to be understood that these are not additional options any time White plays the King's Indian Attack. They are very specific to what White did in the two games covered in the previous article and this one. The early disconnection of the two Knights and not leaving the second one on h2 is specifically what opened up the 13...Nd4 idea in this game. If White can retake on f3 with the Knight, then playing ...Nd4 isn't a very good idea as White can trade on d4 and apply immediate pressure on d4 after that with the other Knight coming to f3.


This concludes this edition of The French Connection. Til next time, good luck in all of your French games, Black or White.
Posted by Patrick McCartney at 6:32 PM