Hello everyone and welcome. While the whole country is virtually on lock down during this pandemic, there clearly won't be a whole lot of competition going on in the next couple of months. I will continue to publish articles periodically (though I may skip a week here or there if nothing good comes up), but most of it is going to be either games from the past, or else blitz or rapid games. While blitz and rapid tend to be of lower quality than classical chess, every now and then one comes up worth covering, and that's what we have today. Black takes a hot pawn early on that is not "refuted", but typically White gets more than enough compensation for the pawn. That said, we will see White attack down the center after a few errors by Black, and in the end, Black loses a piece and therefore the game.

Let's take a look at the feature game.

This is the defining point of a not-so-popular line called the Chase Variation. The naming of the line is simple. White continuously chases the Knight around to gain a space advantage. The question becomes is Black suffocating, or is White over-extended? 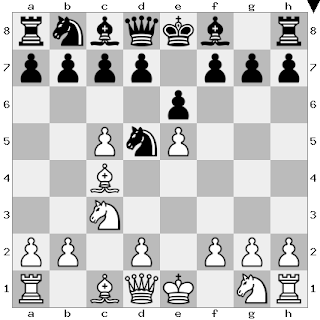 Now we are at the crossroads where Black must make a decision. 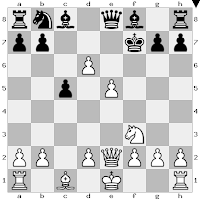 This is a very dangerous pawn grab. While there does not appear to be a direct refutation, play is going to be very difficult for Black. It is better to play 7...Nc6, forcing 8.Qh5 before taking the pawn on c5, with the problem being that 8.Bf4 allows 8...g5!. Now the Queen goes to a better square.

Slightly stronger is 8...Kf8, but White still has more than enough compensation for the pawn after 9.Bf4 followed by castling Queenside.

Black is going to have major problems on the dark squares.

Possibly better was the immediate 10...d5, but after 11.Bd3, White is still better. Now, actually, White makes a mistake.

Because of a tactical shot available to Black, which he misses, White should first play 11.Bg7 Rg8 12.Bf6, and only now, after 12...Qd7, should he castle queenside with a close to winning advantage. 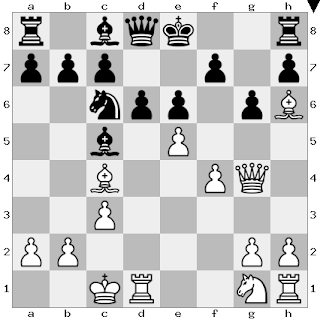 This is a mistake. Black should be focused on completely development while the position is somewhat blocked. Better would be 16...h5 17.Qh3 Bd7 with ideas of castling Queenside. Instead, he allows White to break open down the center. 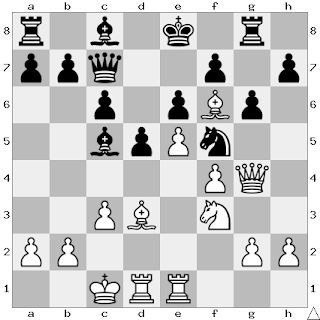 Forced due to the pin of the g-pawn to the Rook.

Missing the opportunity to equalize with 18...h5!

Too little, too late. Black had to play 19...Be6 here. White is still winning after 20.Qxh7, but the game move just made things a lot easier for White to put Black away.

Black is in no way ready to see the center break open.

Black has no way to avoid dropping a full piece and therefore resigned.


Maybe not the best game ever analyzed, but it does show some ideas both behind finding the right move when attacking, and finding the right defensive ideas when they are available. Both sides made their mistakes, White on moves 11 and 17, Black several times in the teens, but it was Black that made the fatal error on move 18, not realizing that he needed to attempt to block the position as much as possible and getting his King castled rather than simply trying to trade the White pieces off.

I also wonder if any Alekhine players out there would be brave enough to play the 6...d6 line all the way through. Black is fine, but it could be viewed as too scary for the normal human being. Mikenas actually played it once against Nezhmetdinov in 1948, but he played the wrong move on move 15 and got blown away, but had he played 15...Nc6, he'd have been ok. Just curious to see if any amateur would ever take up that line.


Til next time, good luck in whatever games you are able to play during this time of crisis.
Posted by Patrick McCartney at 9:39 AM