Hello everyone and welcome to the thirty-eighth edition of The French Connection. In this one, we are going to be looking at an interesting early check for Black in the Tarrasch Variation and be looking at another game from the Lockdown Cup. With the feature game, we will be looking at what is one of only two lines that White can play that pose any question at all to Black's idea, and so we will be looking at that line along with why other lines just don't do the job, and maybe we'll take a look at the other main line in another article when we see it featured in an actual game. 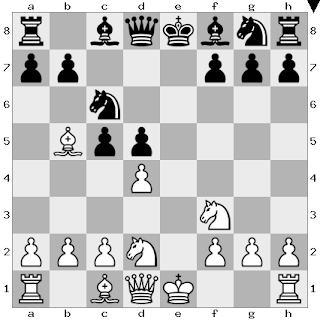 That said, the old main line, which is still played today, sees Black playing 6...Bd6 here, after which we see White trading on c5 with 7.dxc5 Bxc5 and then 8.O-O Nge7 9.Nb3 and the Bishop retreats to d6 (more popular) or b6. I still to this day have little interest in that line as Black.

However, Black has another interesting move here that caught my eye and is why I went ahead and played 5...Nc6 instead of 5...Nf6.

This might, at first glance, look like a dubious move, putting the Queen on the same file as the King. In the line with 5...Nf6, after 6.Bb5+ Bd7, instead of trading on d7, there is the line where White tries to grab a pawn, at least temporarily, with 7.Qe2+ Be7 8.dxc5. The major difference between that line for White and this line for Black is that Black has no intention of staying on e7 with the Queen, whereas the other line for White, he actually leaves the Queen on e2, trying to hold the extra pawn, and if Black finds the right response, he really has to let it go, but if he doesn't, White just ends up a pawn ahead, but that's a big if, and if Black does play it right, it results in a major waste of time for White.

Here, however, the idea is simple. Just like in the 5...Nf6 line, Black would really like to develop the Knight actively on f6 rather than the passive e7-square. In the normal main line with 6...Bd6, White's development flows smoothly. He hands Black the Isolated Queen Pawn. He makes the Bishop move twice, similar to the battle of the tempo in the Queen's Gambit Declined. He gets his Knight out of the way of the Dark-Squared Bishop with the gain of tempo by making the Bishop move a third time, and to avoid problems on the e-file, Black has to develop his Knight passively on e7. By giving this check, White's decisions are highly limited. Unlike the line where White tries to win a pawn mentioned above, in this case, the King's Bishop has already been developed to b5. Interposing with the Bishop doesn't develop the Bishop like it does for Black when White plays 7.Qe2+. It in some ways "undevelops" it. Forces White to move it to a more passive position. But it turns out, that really is White's only choice if he wants to try to maintain any sort of an advantage, and so therefore, the move played in the game was as such.

There is absolutely no reason to be afraid of the Queen trade. However, now that the Bishop has been forced to retreat, Black is ready to re-locate the Queen.

The reason for playing this move immediately is the c5-pawn. If Black does not move the Queen now, then White can take on c5 and Black will have to take back with the Queen, which is undesirable. Now, if White takes, Black will take with the Bishop and develop yet another piece.

More normal here is 8.O-O Nf6 and only now 9.dxc5 Bxc5 10.Nb3 Be7, which the game transposes to after Black's 10th move. I mention this move order because the alternative to 9.dxc5 is the prophylactic move 9.Re1, which is supposedly the most challenging move for Black, and if I ever am faced with this line, I will likely cover it in another article, but this one here is all about the 9.dxc5 line, the only other options that poses any questions at all to Black's 6th move, along with earlier deviations and how Black should react to them.

Transposing back to the main line. Now, the question becomes, where does Black want to place his pieces? In this line, the ideal setup is to get his King's Knight to e4 while the other stays at c6, temporarily brings out the Light-Squared Bishop to connect the Rooks, create a battery with the Rooks on the e-file, and then retreat the Bishop back, with a dominance on the e-file, as we will see here in the game.

The right place for the Black Rook. This is more desirable than the passive 13...Rad8, simply guarding the pawn. Now the onus is on White to play the right move. 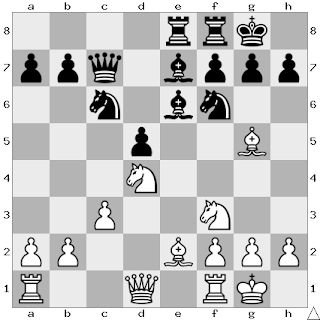 The correct move here! Taking either the Knight or Bishop will only help Black's pawn structure, and the dubious idea of trying to re-route the Bishop with 14.Bh4?! only backfires after 14...Ne4, removing all dreams of taking over the h2-b8 diagonal, and after 15.Bxe7 Rxe7 16.h3 Bc8 17.Qd3 Rfe8, Black has the perfect setup that we just talked about.

Now, we have an interesting position, and I came up with Black's next move, which I have yet to see be played anywhere.

This is all fine and good. However, I think he misses the ship completely. I do not believe 14...a6 is very good for Black at all, and that White should answer not with 15.Qc2, but 15.Nxc6!. Now after 15...Qxc6 16.Nd4 Qc5 17.Bd3, White is for preference as the freeing move 17...Ne4? drops a pawn for nothing after 18.Bxe7, and otherwise, Black's position is really bottled up while White is free to maneuver. Artificial intelligence also claims +/= for White. The other option, 15...bxc6, looks at first like Black should be ok since after 16.Bxa6, Black can play 16...Qb6 and force White to either give the pawn back, or else put his Queen on the dangerous open e-file with 17.Qe2. The problem is, the latter works thanks to Black's two Bishops being in the way, giving White just enough time. For example, after 17...Bd8, threatening discoveries on the Queen, White has 18.Be3! with a practically winning position. Of course, this is not all forced, but a pawn is a pawn, and while White might have to spend an extra move to re-group, the compensation Black gets for the pawn is nowhere near enough.

Therefore, I think Black should keep the a-pawn back for as long as possible, and hence my novelty of 14...h6. It kicks the Bishop back with tempo, and prepares Black's expansion that comes up shortly. He should not be afraid of a Knight or Bishop coming to b5. With the Knight, Black can simply retreat to b8 and then when the time is right, kick the Knight back by playing ...a6 with tempo. In the game, White never goes down that rabbit trail, and rightfully so.

There's the freeing move, getting the Bishops off the board and opening up for Black to double on the e-file.

It seemed like this square was better than going all the way back to c8. There is nothing to worry about on b7, and since ...a6 was not played, I over-protected the c6-square in case the Bishop thinks about coming to b5. It should also be noted that the abandoning of the protection on d5 is not a problem for tactical reasons.

Completing the mission of getting the Rooks lined up on the e-file. Next we will see Black start to expand on the Kingside.

Also possible here are 19...g5, and the more reserved 19...Qd6. Either way, the position should be dynamically equal. The important part for Black is to remain active. If he sits back for too long, what might be a teeny-tiny advantage for White will turn into a big advantage because of the isolated pawn. The player with the isolated pawn is the one that needs to stir up activity to compensate, and so Black is coming in to attack the White Kingside. 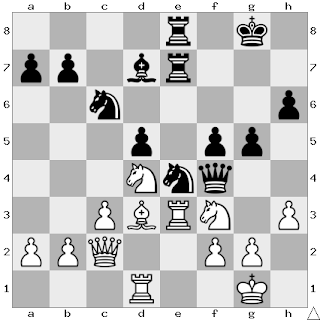 So now Black has the space advantage, but he is still saddled with that weakness on d5. White can kick the Queen out with 22.Ne2, which might leave White once again with that "teeny-tiny" advantage that Black should have no real problems holding on to the balance. However, White sees two hanging pawns on b7 and d5 and plays ...

The only problem with this move is that it allows Black to force a draw immediately. Do you see how?

All other moves pretty much lose for Black.

And there is the dagger. All hopes of winning for White are gone!


An interesting game that illustrates the dynamics of the 6...Qe7+ line of the Tarrasch when White plays 9.dxc5. Again, he does have one other alternative in 9.Re1, but pretty much all other moves cause Black no problems at all. A few things for Black to remember are to always move your Queen immediately after the check if White interposes with the Bishop so that you can take back on c5 with the Bishop if the pawn is captured by White, and that with the isolani, you do not want to passively defend the isolani with a move like ...Rad8, but rather, your ideal setup is to get the Knight to e4 and double the Rooks on the e-file. As the game proceeds, your number one priority as Black is to remain active! This will often lead to the dynamic balance between space and activity versus pawn structure.


This concludes this edition of The French Connection. Until next time, good luck in all of your French games, Black or White!
Posted by Patrick McCartney at 7:27 AM