In Today's article, we are going to cover the 2nd round of the South Carolina Championship. This was the game played immediately before the game played in the endgame article published earlier this month. The game features a rare opening simply known as the Kingside Fianchetto, an opening defined based on White fianchettoing his Kingside and playing d4, but not c4. With both pawns advanced, you are in the territory of mainstream Queen pawn openings, like the Fianchetto King's Indian, Fianchetto Grunfeld, or Catalan, while advancing the c-pawn but not the d-pawn puts you in English/Reti Terrotory. Advancing the d-pawn but not the c-pawn can lead to some difficulty in White developing his pieces, particularly his Queenside pieces. The only sensible way to avoid moving the c-pawn is to fianchetto the dark-squared Bishop, as developing it classically to say, f4 or g5, playing the Knight to say, c3 (with the pawn still on c2), and then maybe advancing the Queen to d2 and the a1-Rook to d1 might get the pieces out, but White's position is severely cluttered and it becomes hard to maneuver the pieces with the lack of space. However, even after fianchettoing the dark-squared Bishop, where does everything else go? The Knight to d2? But then what about the heavy pieces which are now connected, but with nowhere to move then except across the back rank itself? For this reason, this opening can often be viewed as being very slow, and we will see a game where Black doesn't take advantage of this in the opening, allowing White to build an advantage until White errors and loses a Pawn, only to see Black counter with a blunder later on and White has a brief window of winning opportunities, but once he misses Black's trick shot, the game ends up a dead draw, so we'll have a lot cover in this game.

Without further ado, let's take a look at the featured game.

Now the move 6.c4 would be a direct transposition to the Fianchetto King's Indian, but White plays a different move. 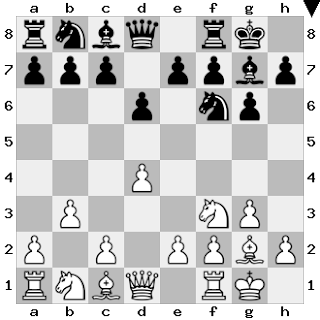 So here we have the starting position of what is probably deemed the "Main Line" of the Kingside Fianchetto, if such a "Main Line" exists. To understand the best way to respond to this opening requires understanding the main difference between the diagram position and the pawn going to c4 with the move 7.Nc3 coming. With c4 and Nc3, White has greater control over the central light squares, but here, White's passive idea of fianchettoing the dark-squared Bishop leads to a lack of control of e4 and d5, and should be the driver of how Black should follow up here.

This is the best move available to Black in this position, but it also shows the problem with the line Black played. In the normal fianchetto King's Indian with 6...c6 and 7...Bf5, Black will usually look to trade two sets of minor pieces off, alleviating the cramp. Here there is no cramp as White hasn't claimed territory, and his pieces are tripping over each other. 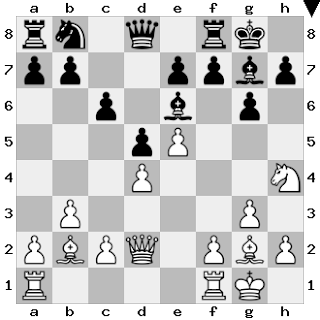 And just like that, White has gone from a lack of space to a fairly significant space advantage after inferior play by Black. The next few moves don't change the assessment, and actually, White proceeds to even gain some space on the Queenside as well. 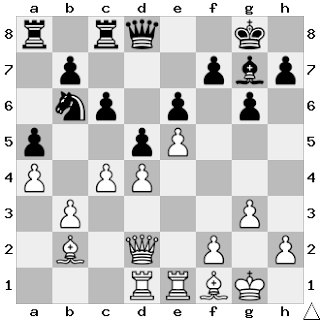 We are now at a critical point of the game. White has maintained his advantage thus far, but now needs to find the right move. What is the right move for White in this position?

White's idea is that he thinks he threatens the a5-pawn and is forcing Black to retreat the Knight. The correct move here is 21.c5! This forces the Black Knight back, and with the lack of space, it is very difficult for Black to maneuver and get all of his pieces to the Kingside. This gives White a local piece superiority on the Kingside, and so after 21.c5! Nd7 22.Qf4, White has a Kingside Attack.

White was forced to play a move like 25.Qe1. Now Black misses a winning idea.

Black missed it! 25...Nd5! and sudden Black is significantly better, if not winning. 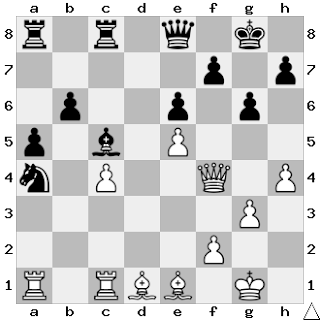 It is now Black that can claim a slight advantage. White doesn't have enough for the missing pawn.

White's position is virtually frozen, and we will see him toggle his Bishops while Black's position continues to improve. 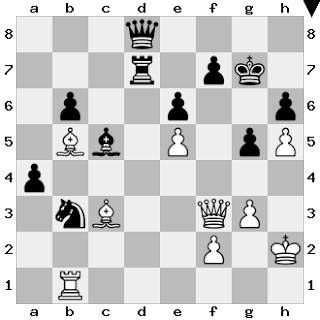 And now we reach the critical position for Black. He is up two pawns, and so any forced exchanges of equal material benefits Black. Can you find the move that puts White away?

This move is still winning for Black, but he makes matters far more complicated. It should be noted that at this point in time, White has 12 minutes and Black has 10 minutes for the rest of the game with a 30 second increment per move, and so time is becoming a problem for both players.

This, however, is a complete blunder and the position goes from winning to dead lost just like that! Correct was 47...Kg8! when both 48.Qxd8+ Rxd8 49.Bxa4 Ne2 50.Be1 Rd5 51.Kg2 Rxe5 and 48.Bxd7 Be7 49.Qxh6 Nf5 50.Qxe6 fxe6 51.Bxe6+ Kg7 52.Bxf5 a3 are winning for Black, despite the latter one featuring an equal material count, the problem being that the a-pawn will tie down White's pieces and Black can attack White's other weaknesses while the White pieces tend to stopping the a-pawn. Both of these lines are far more complicated than if Black had played 46...Nd2 instead of 46...Nd4, but at least Black would still be winning, unlike in the game.

This doesn't lose the advantage yet, but 49.Rd1 is stronger and wins on the spot. Black could resign immediately as 49...Nf3+ doesn't work because once White takes the Knight with the Queen, the Rook will be protected.

This is still winning for White, but there is now room for error, and an error is exactly what White makes.

After the move played, the position is actually drawn! 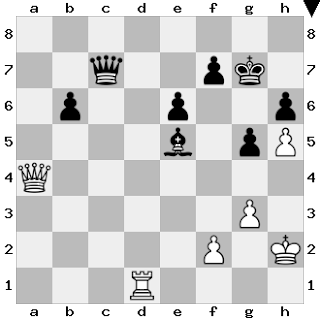 Thus far, since White's blunder on move 51, Black has made all the correct moves to hold the draw. Here is the trickiest one. There are many moves that leave White with only a slight advantage, but only one move completely maintains the balance. Can you find it?

A deflection tactic! 54.Qb3 can be answered by 54...Qc5 where Black's pieces are active and the material is technically equal, and the position itself is dead equal. Otherwise, it's all about seeing the trick when the White Queen fails to protect the Rook.

The Bishop is poisoned!

This is forced as 62.Rg2?? allows 62...Bg3! and once the Bishop relocates from h4 to f4, Black's winning. Notice that after something like 63.Kg1 Bf4, White has no way to avoid dropping the h-pawn, and the Queen has absolutely no way to harass the Black King. Find a square to safely check the Black King from? It doesn't exist!

Therefore, White is forced to stop Black's immediate mate threat by moving his Queen, and regardless of whether that is to e2 or c2 or b2 or any safe square on the second rank, Black will repeat with 63...Qh3+ and then go back to d7 if White blocks with the Queen. One final note is that 63.Qh2 loses to 63...Qd1+ 64.Kg2 Qe2+ 65.Kh1 Qxf3+ and we are back to the same losing position for White that results from 61.Kh1 above.

So given the threats and forced reactions to each of them, there is no way for White to avoid the perpetual check, and that is exactly how the game ends.


Wow! That was a hand full. Three things to note from this game:


This concludes the coverage of the second round of the South Carolina Championship. Next time, we will look at the fourth round. Till then, good luck in your games.
Posted by Patrick McCartney at 1:13 PM