Hello everyone. July is just around the corner and those that have been following the blog since its inception in 2017 might remember what that means. What I like to call the "Summer Tour" is coming up, and so with that said, this will likely be the last post of mine prior to that Summer Tour, but once I get back in late July, analysis from those games is what will be covered.

For those unfamiliar with what I'm referring to, each year in July, I usually will travel long distance to play in a couple of tournaments outside both of the Carolinas. When you have played as many tournament games as I have (over 2900), it's hard to get opponents you haven't played before, and so in 2017, I went to New Hampshire (The New Hampshire Open) and Virginia (The Charlottesville Open) while in 2018 I went to Kansas (The Kansas Open) and Maryland (The Potomac Open), and both years I followed that up with coverage of those games in late July, August, and possibly into September, depending on how many of those games were worth covering. The only tournament of those four where not every round was covered was the Kansas Open, if that gives you an idea how bad that one was compared to the others. So in the coming weeks starting with the end of July, be on the lookout for that. This year's stops will be in Iowa and Michigan. For those of you that haven't seen the previous two years, you can go to the archives in the late Summer of 2017 and late Summer of 2018 and you can find them there.

So then the question became, what would I cover in the final article before then? Well, we are going to be looking at a game with many missed opportunities where those opportunities were literally available once and only once each, where literally every move mattered. This may be anything from a favorable trade to a raging attack, and chances were available for both sides in this game, and so without further ado, let's see what both players missed!

This is a very passive move, and probably not a good one as we are going to see that White is the one with all the shots early on. Far more common are the tempting 3...Qh4+, although this move isn't very good as after 4.Kf1, White will gain time in development by attacking the Queen when he develops his Knight, making Black move the Queen again, and the stronger moves, 3...Nf6 and 3...d5. In the former, 3...Nf6, Black gets on with his development and intends to build a strong center via ...c6 and ...d5 while White is spending time getting his Pawn back on f4. With the latter idea, 3...d5, Black is willing to give the Pawn back immediately to free up his minor pieces and try to achieve easier development. 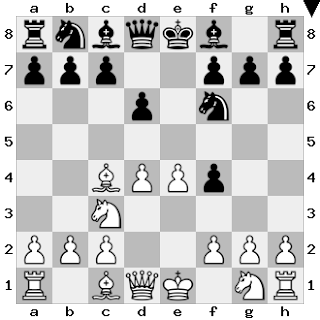 Now is the best time for this move, but as we will see, White will maintain an advantage due to Black's passive 3rd move. Already we are seeing a case of one move spoiling it for Black. This is not unusual in such a sharp opening like the King's Gambit. 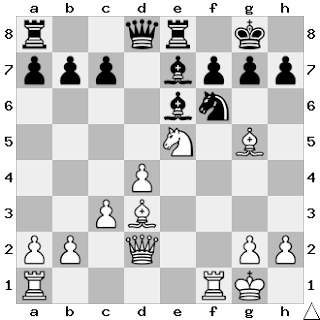 Here we have a very critical position, and White has the opportunity to get a clear advantage immediately. Do you see how?

And just like that White's advantage is gone! There are two very strong moves here for White, of which I like the second one because the benefits are more concrete. White can get his last piece into the game with 17.Rae1 with a clear advantage on the basis of space and better development. The other move is 17.Qe2, and the pressure on Black's center and Kingside virtually forces him to jettison a Pawn for virtually no compensation after 17...Ng4 18.Bxe7 Qxe7 19.Nxg4 Bxg4 20.Bxh7+ (20.Qxg4 Qe3+ wins back the piece) 20...Kxh7 21.Qxg4 Qe3+ 22.Rf2 and Black has virtually nothing for the Pawn. White's got a clear advantage in this position.

Both players missed the consequences of this move. Pressuring the White center with the immediate 17...c5 leads to a balanced position.

And when it rains, it pours for White. Better is to fess up that you made a mistake and play out a roughly equal position with either 19.Bb5 or 19.Be3. Black might have a slight pull in the form of initiative, but nothing more. Now instead, Black's in the driver's seat. 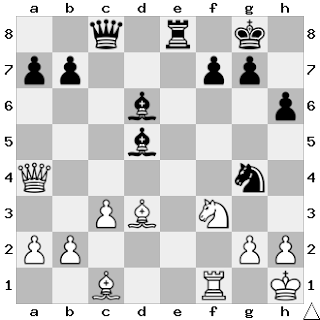 Once again, a very critical decision for White.

Black is winning immediately after 27...Nf2+ 28.Rxf2 Bxf3. The Queen on c8 is poisoned due to make threats on the back rank. With the Black Bishop on c5, going to g1 would never be an option for White, unlike in the previous line where White plays 26.Bf5 immediately. 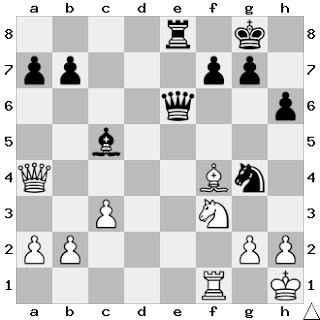 Once again, White has one move that keeps the balance, and all other moves should lose. Do you see the right move?

Once again, White fails to see the only defense, which was 29.Bg3!, but at the same time, we are going to see Black miss yet another golden opportunity via a sacrificial attack, similar to the opportunity White had on move 18.

Again there was only one move for White, and this time, it was 30.Be5! with a roughly balanced position. Now Black has a beautiful sacrificial combination available that he just outright missed.

This move leads to a better endgame for White. Theoretically, it's equal, but with White having the majority that is away from the Kings, it's Black that has to be extremely careful, far more so than White.

White's last move wasn't very good, and Black should now play 36...b5, tying down the White Pawns onto the dark squares, which is the color square the Bishops are on. Instead, Black makes a few inferior moves here, and White will come out with a significant endgame advantage. 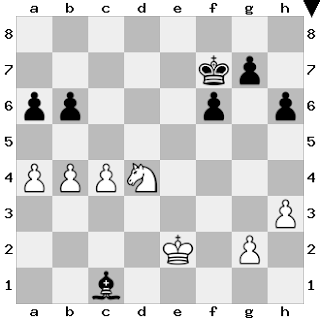 This is probably the worst of Black's legitimate options, but none of them are very good. White is still better after 44...Ba3 45.b5 axb5 46.cxb5 or 44...Bf4 45.Kd3 Bd6 46.b5 axb5 47.axb5 Ke8 48.Ke4 Kd7 (Or 48...g6 49.Kd5) 49.Kf5 and White is clearly better in both cases. As we can see, not all cases is the Bishop better than the Knight when the position is open and there are Pawns on both sides. In this case, other factors outweigh the specific piece owned by each side. For White, his majority is on the side away from the Kings, his majority is farther advanced than Black's, and his Knight is centralized, all positive factors that outweigh Black having the piece that is traditionally better in open positions.

This trade is horrible for Black. He must keep the final piece on the board to hope to survive. 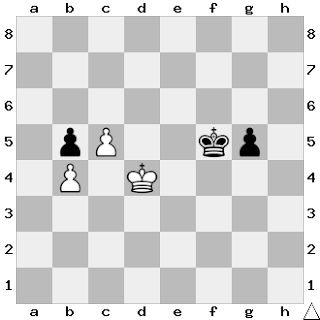 Now, with roughly a minute left on White's clock and about 30 seconds on Black's clock, each side getting 15 seconds per move, the unthinkable happens to both players.

There are two moves that win for White. 53.c6 and 53.Kd5, the latter working because promotion comes with check if Black goes for the Pawn race.

But this move throws the win away completely!. The position is now a draw, or at least it should be!

And now the simple opposition move, 55...Kf6, is completely drawn. After 56.Kg3 Ke6 57.Kg4 Kf6, White can't make progress as every time White goes to g4, Black goes to f6, and every time he moves away from g4, Black moves adjacent to f6, and going to h5 doesn't work as ...Kf5 keeps Black in the box of the White c-pawn. However, Black now does the unthinkable.

Black cannot advance the Pawn due to a zugzwang available to White.

And now Black realizes the problem. Going to g5 with the King puts the Black King out of the box of the White c-pawn and the c-pawn promotes. Therefore the g-pawn falls, and White then triagulates the Black King to force his way through and win with the protected passer.

Always be on the lookout, every single move, and don't let the opportunities pass you by.

I hope everyone got something useful out of this, and good luck to everyone in your games in the coming month, and be on the lookout for game analysis of the games played on the Summer Tour in Iowa and Michigan when I get back in late July.
Posted by Patrick McCartney at 8:37 AM