Hello again and welcome to the next edition of the French Connection. In this edition, we will see our first game where White uses the Advance Variation. Just like the game seen in Volume 2, we will see another case where White has the opportunity to achieve the "Good Knight vs Bad Bishop" nightmare ending that Black is usually looking to avoid, but the temptation of a pawn leads White the wrong way in this game, and subsequent time trouble leads to sloppy play at the end.

In addition to the Good Knight vs Bad Bishop theme, we will briefly talk about opening move order tricks, a common tactic that Black must always be on the lookout for dealing with the d5-pawn, and that sometimes the best defense is sacrificing.

With all that said, let's get to the game.

So here, with myself as Black, we see the main response in the French Defense. This was actually the first time I have played this move in a few years, as previously I had been exclusively playing the 4...Bd7 and 5...a6 line that I recommend for Black in the French repertoire published back in the summer and fall of 2017.

An offbeat sideline that some players will play to try to trick Black while others simply want to avoid all the heavy theory in the main line, 5.Nf3.

It is best for Black to execute this trade before moving the Knight to f5. Instead, 7...Nf5 8.dxc5! Bxc5 9.Bxc5 Qxc5 10.Bd3 is better for White mainly due to piece coordination. 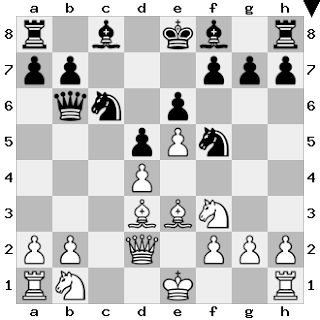 This move is ok as the white knight has not yet arrived at c3, but once it does, Black should look at taking the Bishop on e3. Of course, Black can just as easily play 9...Nxe3 10.fxe3 Be7. Some may fear the idea that White can blow open the center with an upcoming e4, but that idea is a lot harder for White to execute than it looks. For example, 11.e4? fails to 11...Bd7! (a move you should get used to playing as it stops all discovered check tactics when trying to grab the pawn on d4) 12.exd5 Nxd4! 13.d6 Nxf3+ 14.gxf3 Bh4+ and Black has a clear advantage.

White does not gain anything by splitting the Black pawns as Black is fine after 10.Bxf5 exf5 11.Nc3 Be6.

Black should now take the Bishop via 10...Nxe3. After 11.fxe3, once again Black should play 11...Bd7, stopping all e4 ideas as the d4-pawn will then hang. Of course, the threat by White was to take the knight on f5 followed by the pawn on d5, and so Black is forced to either move the f5-knight, protect it with another piece or pawn than the e6-pawn, or cover the d5-pawn with a move like 10...Qd8, which is overly passive. This is why taking the Bishop and opening the f-file for White was the best option for Black here.

The immediate 11.Bxf5 exf5 and then 12.O-O is stronger and White has the advantage.

Even after the push of the g-pawn, best for Black is to take the Bishop on e3 and follow that up with 12...Bd7. Both sides will continue to fail to make the best move, namely Bxf5 for White and ...Nxe3 for Black.

Black is not ready to blow open the position.

After 13.exf6! Bxf6 14.Bxf5 gxf5 15.Bg5 O-O (How else is Black going to defend this? Taking the Bishop leads to the Black King getting stuck in the center) 16.Bxf6 Rxf6 17.Ne2 and White has a technically won position. The e6-pawn is weak. White has the dreaded "Good Knight vs Bad Bishop" scenario that Black usually wants to avoid in the French, albeit with an extra knight each, and the white king is safer.

The major difference between white taking on f6 and black taking on e5 is that black will be able for force white to place a pawn on the e5 square, which fills in Black's hole on e5 in a similar way to filling a cavity at the Dentist's office. This same theme is often seen in the Najdorf Sicilian where Black has the backwards d6-pawn and tries to force White to place a pawn on d5 via trading pieces on d5 and using the White pawn as a shield to the weak d6-pawn. Virtually the same theme applies here with the weak e-pawn for Black. 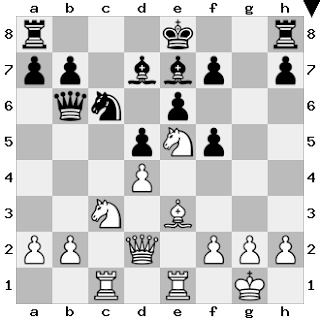 As already mentioned on move 13, Black wants to fill in the e5-square with a White pawn, filling in the cavity before his position becomes so bad that a root canal would be less painful than playing the Black position. Since White took with the piece on move 15 rather than the pawn, this piece trade is virtually forced if Black doesn't want to get blown off the board.

This is a case where using the theme of the "worst placed piece" would have helped White find the best move. The worst piece for White is the Knight on c3. It would be better placed on d4 or f4, attacking e6. The former move also blocks Black's passed pawn while the latter also eyes the weak black kingside. After 17...h5 18.Bc5 Bxc5 (or 18...Bg5 19.f4) 19.Rxc5, White gets control of the c-file, and can at pretty much any time he wants to, post the Knight on d4 or f4, so there is no rush for White to do that and against most replies, White will likely follow up with 20.Rec1 and virtually dominate the position. The first of multiple opportunities for White to shrink this game down to two results. A draw or a win for White. Black has zero winning chances here. This is why he should take on e3 earlier rather than let white take on f5 leading to a rigid structure.

Opening up the d7-square for the king.

With the g6-rook pinned to the king and the d-pawn pinned to the queen, the cheap shot 20...d4 doesn't work. White simply plays 21.g3 and is significantly better. Black also can't simply rely on the rook to block the queen and remain pinned as Nc3-e2-f4 will win an exchange if Black still hasn't gotten out of the pin.

This is Black's best move in what is already a bad position as it gives White one more opportunity to reach the "two result position" via the Good Knight vs Bad Bishop endgame. What this move also does is offer White the "bait" of getting a free pawn. That said, White will soon learn in this game that greed will get you nowhere as that bait has been laced with a drop of poison, and if you try to go too far with it, that drop of poison will become a lethal dose! 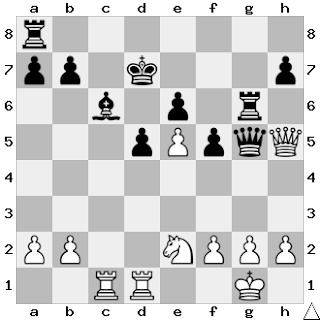 NO! NO! NO! White has the classic two-result position right in his hands! 23.Qxg5! Rxg5. White has the classic Good Knight vs Bad Bishop with the queens and all other minor pieces off the board, just like what we saw after move 20 in the previous French Connection article (link provided above at the beginning of the article). The dream position for White in the French Defense! White was tempted to grab the pawn thinking he could eliminate the one Black threat and then go after the Black King when instead the endgame, while it may take longer to execute than maybe White wanted it to, is simply the one-hundred percent safe route for White. He has zero losing chances, and Black is going to have to play perfect defense just to have a shot at holding the draw. In the position after 23.Qxg5 Rxg5, if given the choice, you would take White 101 times out of 100.

After the move played, White is going to have to walk a very thin tightrope just to hold equality with correct play by Black. 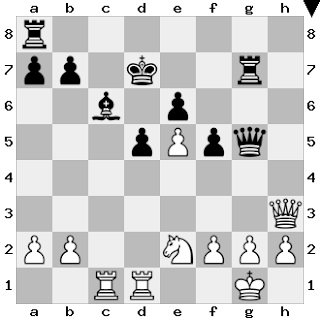 White said after the game that he missed this move when taking the h-pawn, expecting Black to triple on the g-file, a move that would be easy for White to answer. This one is not! Now it is White that is required to play perfectly to draw.

This move loses. White has two ways to draw and all other moves lose.

The move played instead leads to a forcing sequence that is winning for Black. 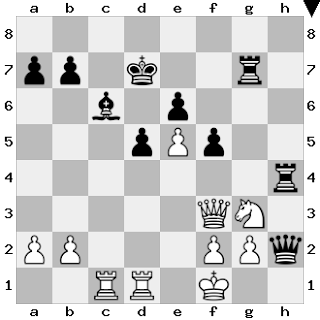 Black blunders in time trouble and offers White one more chance at the draw. Correct here is 29...f4! when you have the following:


Always remember that dream endgame position for White and don't be afraid to go into it, especially in the Advance Variation. Trying to grab free pawns and go after the Black King in quick fashion often tends to backfire on White like it did in this game.

Til next time, hope you enjoyed the game and good luck in all your French games over the board, whether it be with White or Black.
Posted by Patrick McCartney at 8:58 AM