No Risk, No Reward! 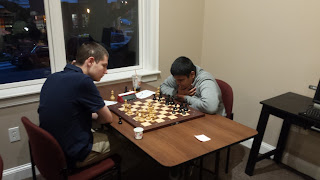 A total of 24 players came to see if they could mimic Lenoid Stein, known by many as the "Master of Risk Strategy", and took part in round 3 of Tuesday Night Action 32. The top board saw Daniel Cremisi(2304) and Pradhy Kothapalli(1870) where both players started the game at lightning speed, and they were down to a Rook and Knight each before most others were even out of the opening. Then play slows down, and White takes the risk of allowing the Black pawn to advance as far as the second rank, but proceeds to attack without allowing Black to promote, grabs a couple of pawns, and eventually wins. Meanwhile, Aditya Shivapooja(1815) took on Patrick McCartney and while the former played passive moves throughout the game, the latter proceeded to advance the pawns in front of his King, sacrifice a minor piece in the mid-teens, and then proceed to play aggressive moves until White couldn't stop a passed pawn and Black proceeded to win, the game of which can be viewed below. On the third board, Sulia Mason(1985) took on Michael Uwakwe(2039), and while the latter continued his typical passive play, the former was out for blood, and the risk paid off as he got the full point by scoring the victory. In addition, Ali Shirzad(1695) defeated Luke Harris(1707).

In the lower section, David Richards(1641) proceeds to grab the lead for himself as the lone 3 and 0 player in the section as he took down Hassan Hashemloo(1307). Other winners include Sampath Kumar(1448), Corey Frazier(1404), Debs Pedigo(1340), Saanchi Sampath(1225), Aarush Chugh(1188), and James Scott(629) while Aditya Vattakatu(1062) appears to have taken on the title of "Draw Master" as he proceeded to declare peace for the third straight week, this time with David Magee(1512).

All results can be viewed here.
Posted by Patrick McCartney at 9:14 PM